Ai-Thinker published an official SDK documentation, as such as an SDK on Github.

This board seems quite promising, as the SDK contains a lot of features, from the basic one (SMS, call, SPI, I2C...) to some which are more complex (MQTT, FileSystem on SD card, FOTA...).

For each API, you will find one example shipped with the SDK ready to be compiled and uploaded to the development board.

Ai-Thinker developed a small board which is perfect for hobbyists like myself! It's called "Pudding" board.

This boards has everything that we need, and even a SD card reader and embedded mic!

You can use ./build.bat script to build project:

By default, build.bat will build a debug version.

In release mode, the watchdog resets the system after an error.

A build and an hex folder will be generated after compile.

Two hex file will be generated into the hex folder (*_B*.lod and *_flash.lod). The bigger file should be flashed after each SDK upgrade. The smaller one will contain the compiled source code and must be uploaded after compilation.

As the A6 chip, the download interface is the HST interface. The pins HST_RX and HST_TX are respectively connected to the TX and RX pins of the USB to serial module.

Please note that when using lithium battery power supply, the POWER KEY must be pressed for about 3 seconds to power on the module (not the case with the USB plug).

Select profile 8955 and change the lastcomport value by the COM port number of your USB/Serial converter, then click on the "OK" button

You should be connected :

You can now burn the firmware. Click on the "LOD" icon:

To flash a file once selected, click on the burn icon:

You can try it as I did with the GPIO example.

After a code change, you just have to compile the source code and press the burn button again. You don't need to re-select the file.

And change the settings according to the following screenshot:

You can now click on the Start sniffing traces button.

Each time that the Trace() function (api_debug.h) is called in the source code, the trace tool will display the content.

Now that I have seen this board, I want to use it on a project!

The main difficulty will be to drive other modules as the GPIO levels (1.9V or 2.8V) are quite different from hobbyist modules (3.3V / 5V).

An example of data exchange between your microcontroller and you web browser with WebUSB. 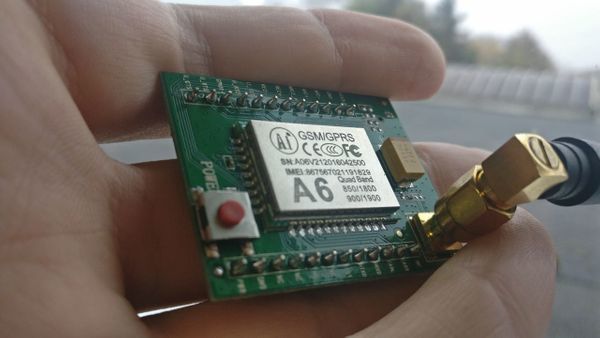 The A6 module can easily be used to add GSM communication to your project as long as you update it.