I salvaged an LCD screen from a cheap non working Android laptop few years ago.

My screen has a TTL 50 pins interface.

The controller can be powered by a 5V power supply.

Sadly I bought a board without understanding that the board is specific to the LCD screen resolution. The board that I got seemed more configured for a 800x480 LCD screen, far from the 1024x600 screen that I got. The screen was unusable as is.

I tried to find a way to update the firmware of the board, and discovered that I wasn't the first one to try.

The controller has an I2C port, which can be used to flash a new firmware.

One "easy" way to do it is to by a specific adapter and a software called ROVATOOL, but it costs more than 15€ and I don't think I will be using it more than once...

An other way to do it, is to use an Arduino sketch, reading / writing on an SD card thanks to a micro-sd card reader. I tried it: epic fail. After checking that the SD card reader was successfully linked to the Arduino, and the controller , the sketch was failing as soon as the SD card "open" function was called in the source code (even without being executed!).

I found an easier solution. It requires an Arduino (Uno in my case), and a Windows software.

The Arduino is loaded with a custom sketch, and is linked to the I2C port of the controller. 3 wires (SDA, SCL and GND), that's it!

The controller pins are labeled on the back of the PCB.

The Arduino acts like a Serial-I2C bridge over USB. The Windows software discuss with the Arduino to read or write into the PCB800099 memory.

Sadly, I didn't backup my firmware successfully. So no turning back!

I used the "expert" mode to flash the firmware.

Instead, I found a GitHub repository which contains a lot of binaries.

I checked the connection between the Arduino and the controller with the "Read status button":

Then, I selected the file in the RTD266xFlash software, and clicked on "Write"...

It takes about more than 1 min to flash the device, but it works!

After rebooting the screen, I plugged it to my PC HDMI output, and I had a third screen! I had to create a new 1024x600 resolution (with the NVidia software), as Windows recognized it as a 1024x768 screen.

I will now try to create a standalone screen with an OrangePi or an old never used Pine64... 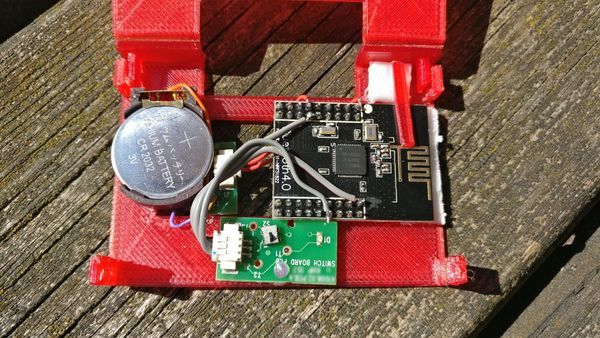 The journey of building a BLE sensor prototype, with a custom firmware based on the Nordic nRF51822 chip and the Ardunio framework.