I love my cats. But they can be really annoying... One of them tries to enter our bedroom every day at 5am, by scratching the door.
I want to be able to stop it! That's why I created my water-spray!

For that, I based my development on a MIXA atomizer (bought on Amazon for less than 4€).

Later on, I used a smaller atomizer from Monoprix: 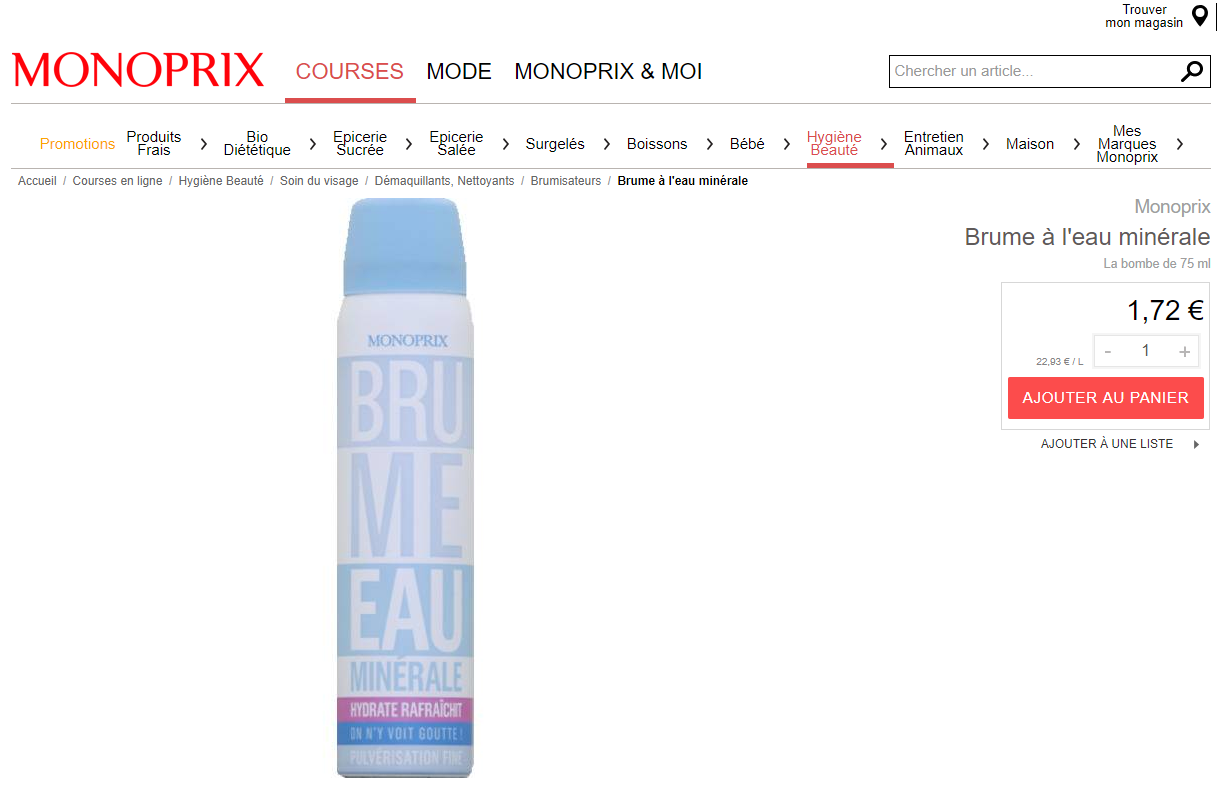 The plan was simple: a stepper motor will have a small elliptic wheel attached, which can press / release the button of the spray can.

I wanted to create a very simple device, so I chose a stepper motor cheap and very common, the 28BYJ-48. 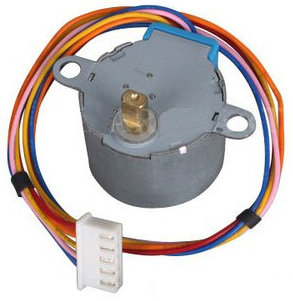 This motor can be driven by a module based on the ULN2003 chip. 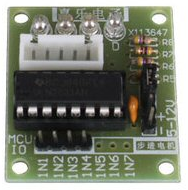 For those tests, I used an Arduino and some simple sketches to rotate the wheel.

I printed some pieces designed with Fusion 360, and used the ULN2003 based module.
The stepper motor is powered by a separated 5V power supply while the Arduino is powered over USB.

I used the CheapStepper library to test the concept.

Epic fail!
Even if I put my design issues aside, the stepper motor wasn't able to push the cap.

I tried to simplify the design, hopping it will work this time.

Epic fail!
Sadly, it didn't worked, the motor was still struggling to press the spray cap. 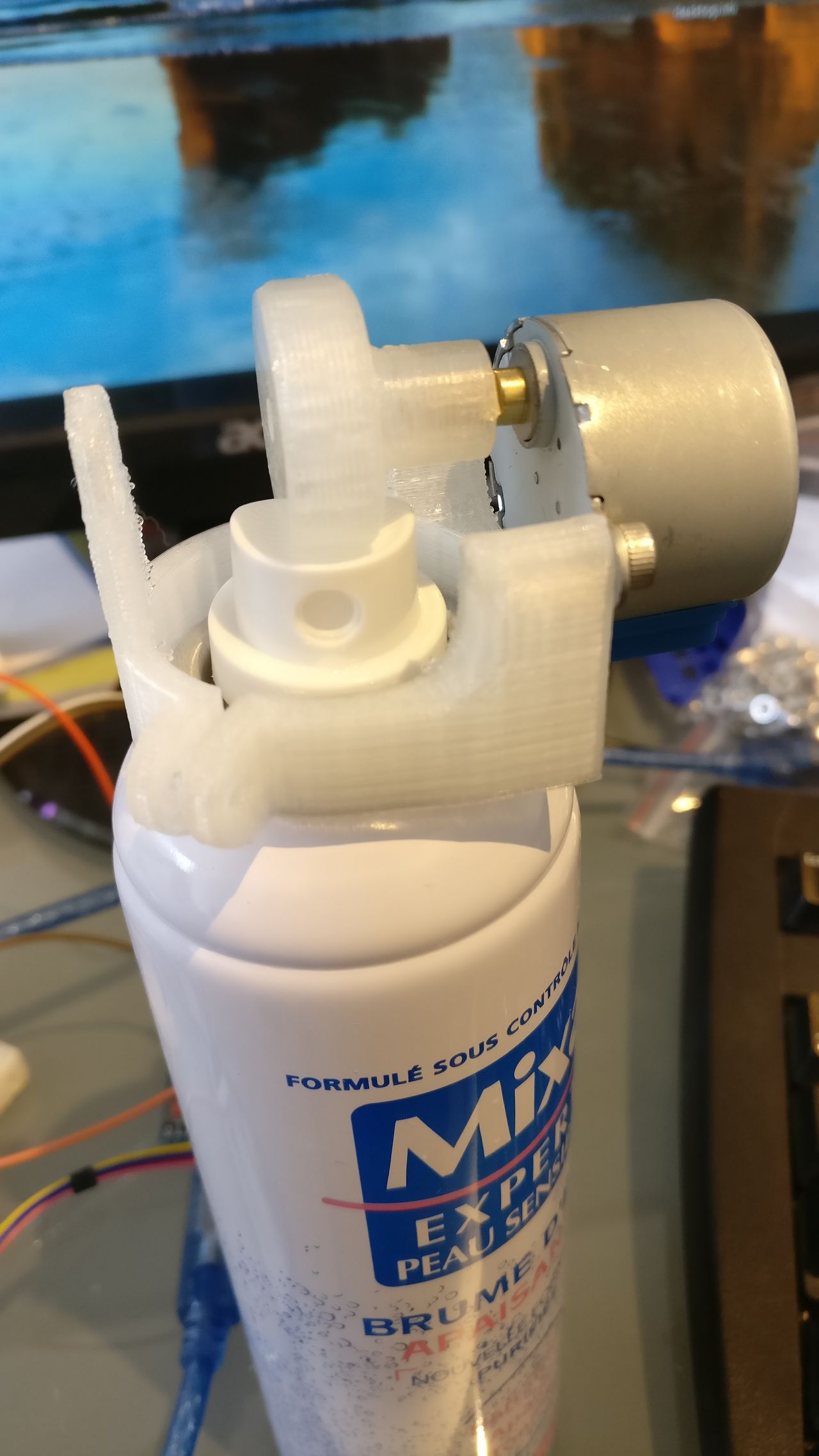 I didn't do a scientific approach on this subject. I should have compute the torque needed to press the cap, but as I don't know how to do that, I preferred the try-and-learn method :)

I found this video and article, explaining how to transform this little motor to a bipolar motor.

This modification adds a lot of torque to the motor, but sadly, it cannot be used with the basic controller board.
Fortunately, I already had some L293D chips (H-Bridge).

First, I cut the PCB trace on the motor: 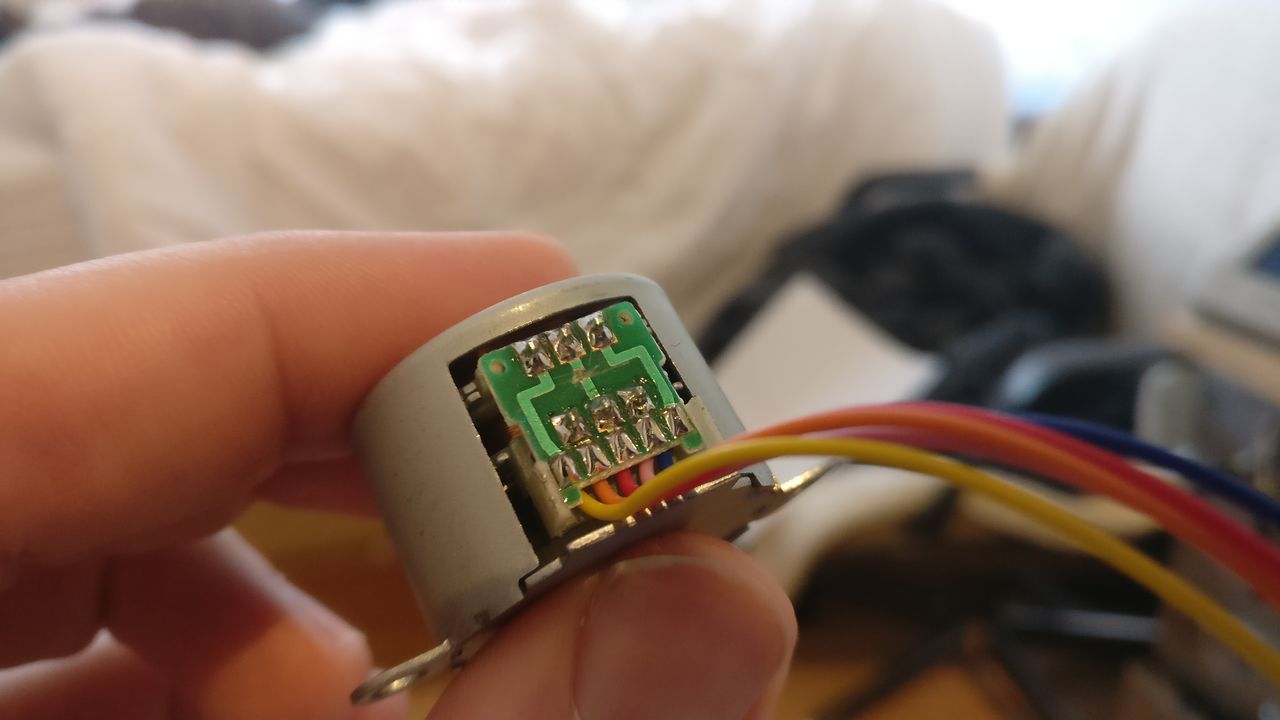 Then, I connected the motor and the Arduio trough the L293D chip (source) : 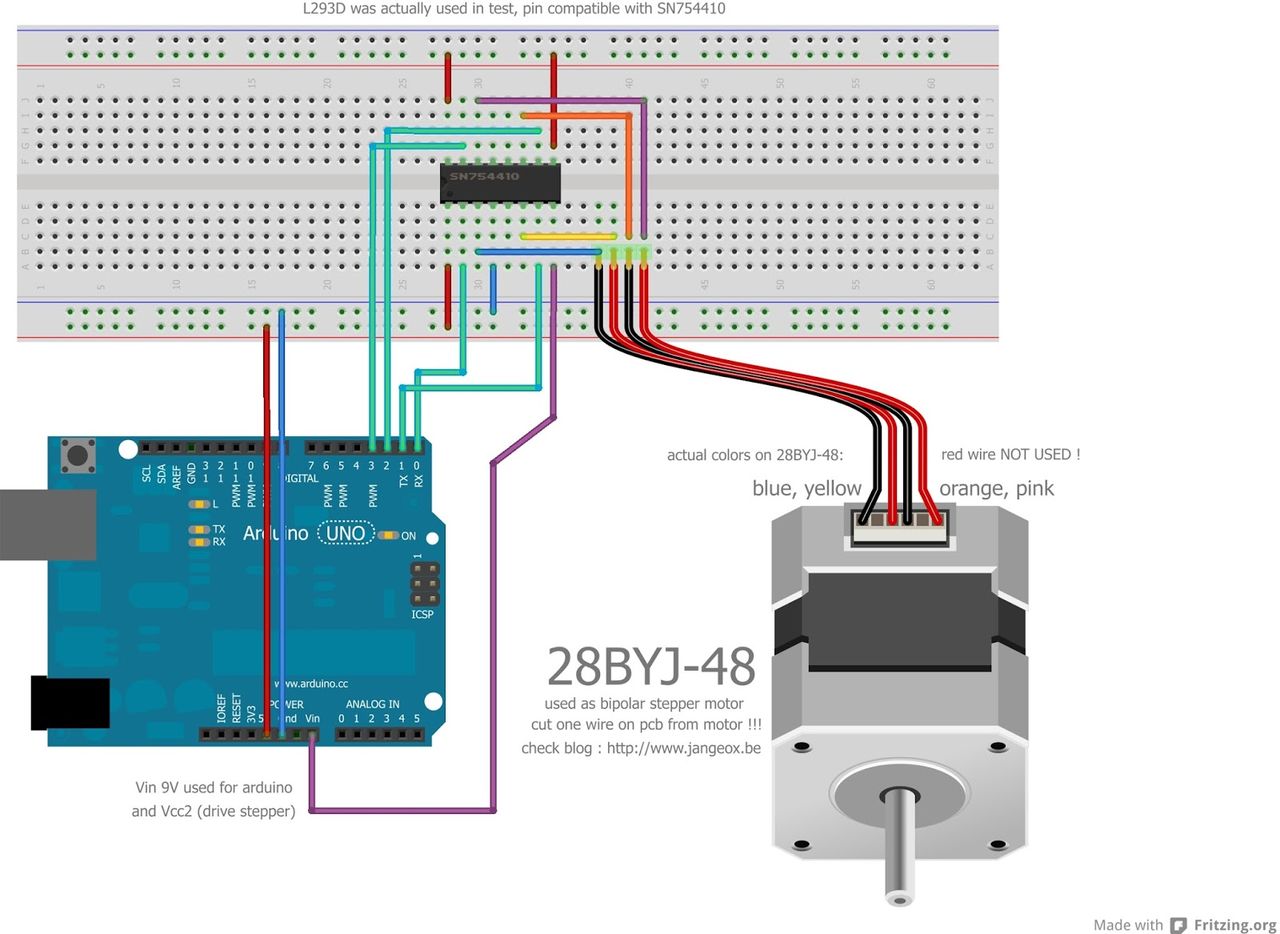 As the windings are twice as long as in the original version, I can use the motor at 9V (instead of 5V). 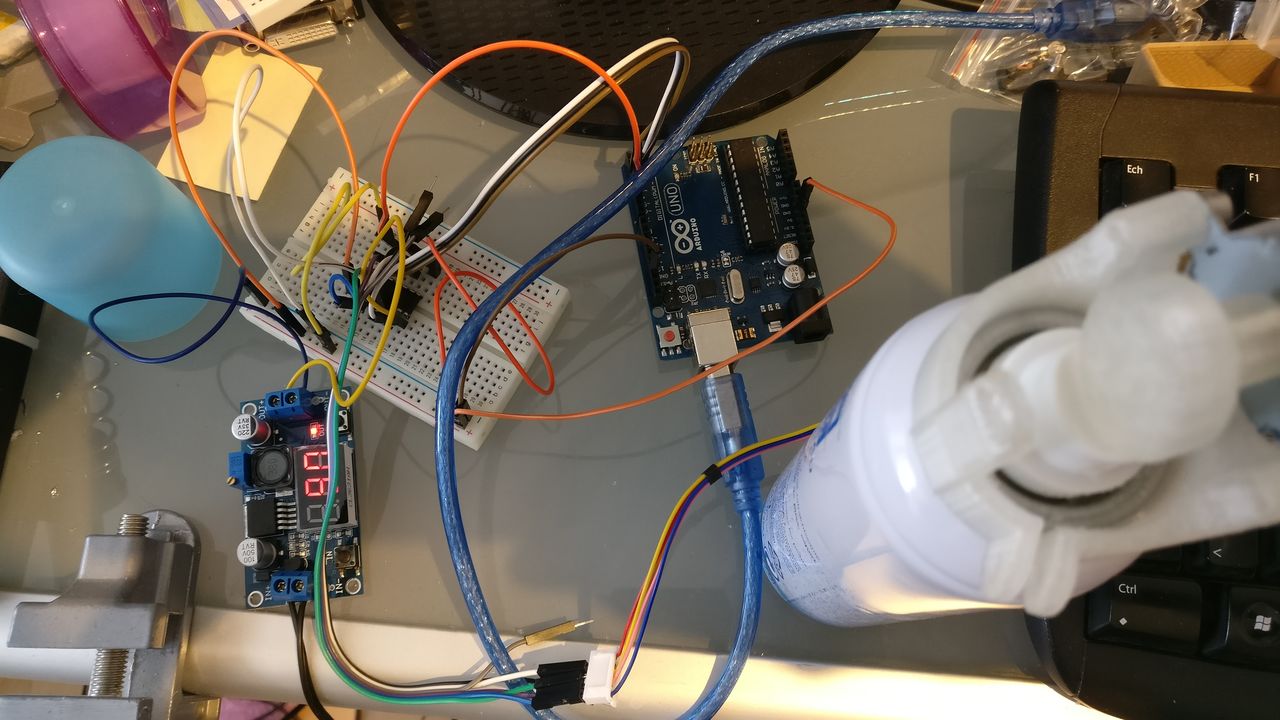 I also changed my design a bit.

I used the stepper library included in the latest version of the Arduino platform.
Note: I don't use the same Arduino mapping as the previous schematics

To go further on this project, I needed to be able to monitor the current state of the device: is it currently spraying water or not ?

I used a basic micro switch, which can be used as endstop o 3D printers. 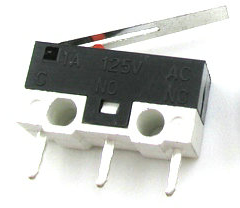 I designed a little switch holder, which can be mounted on the current design.

The switch is closed when the wheel is not pushing the spray cap. 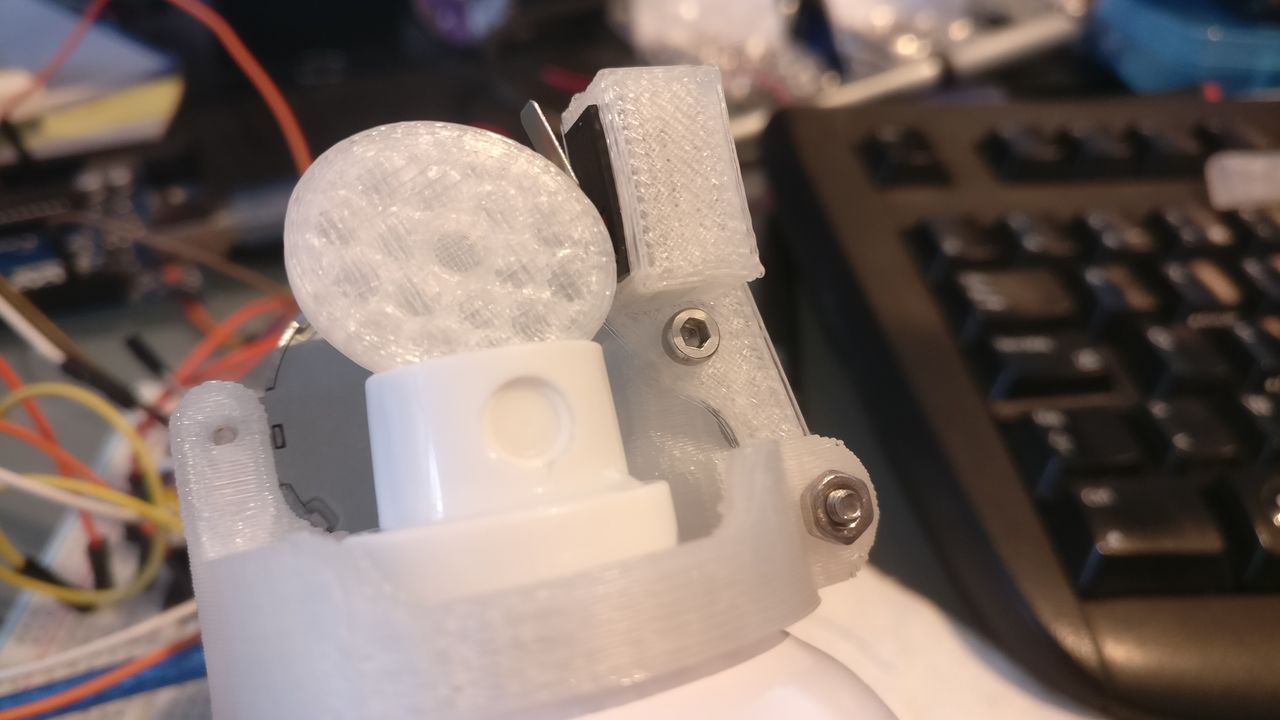 After few attempts, I realized that the tork was sometime still not enough, getting the wheel stucked while pushing the cap.
Note: more the spray bottle contains liquid (and gas), more strength is needed to push the cap

I tried to use a 12V power supply, and it did the trick!

You can find the CAD model below. Please note that the spray bottle model is approximative, and I adjusted the dimensions of each part after testing them. 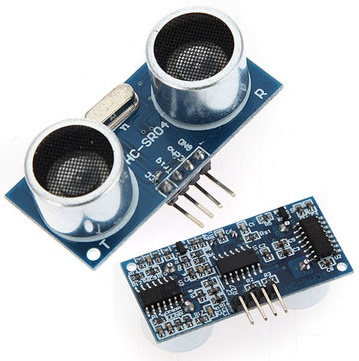 One think to notice: I had to add a delay between each distance reading, to avoid any noise from the previous reading. I used a 200ms delay, as it seems to work fine, but I didn't try to find the best value.

I used an Arduino pro mini at 5V. 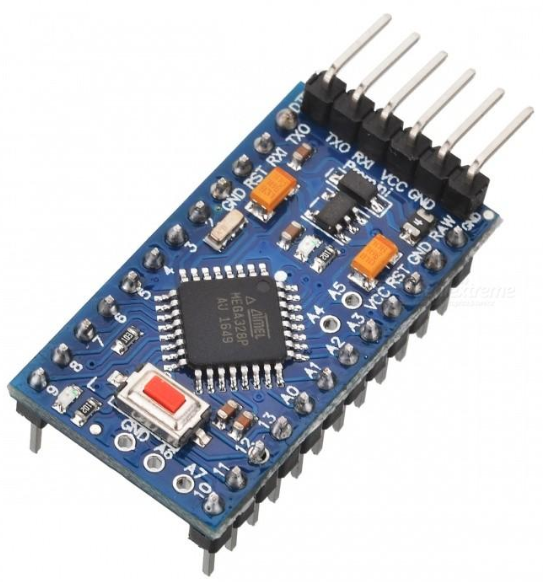 There is a voltage regulator on board so it can accept voltage up to 12VDC. As I was supplying 12V to the board, I used the "RAW" pin and not VCC.
But after few attempts, the regulator stopped to work (no output). I still don't know why. The regulator is only used to power the HC-SR04 (15mA during use) and the L293D. I had to use another regulator to power the L993D chip and the Arduino. 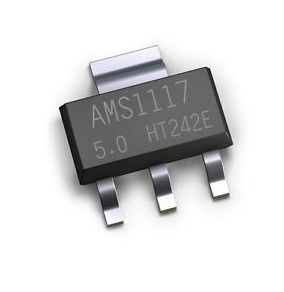 Note: the typical appliation picture is for an 1.8V output, but is also valid for the 5V version of the AMS1117 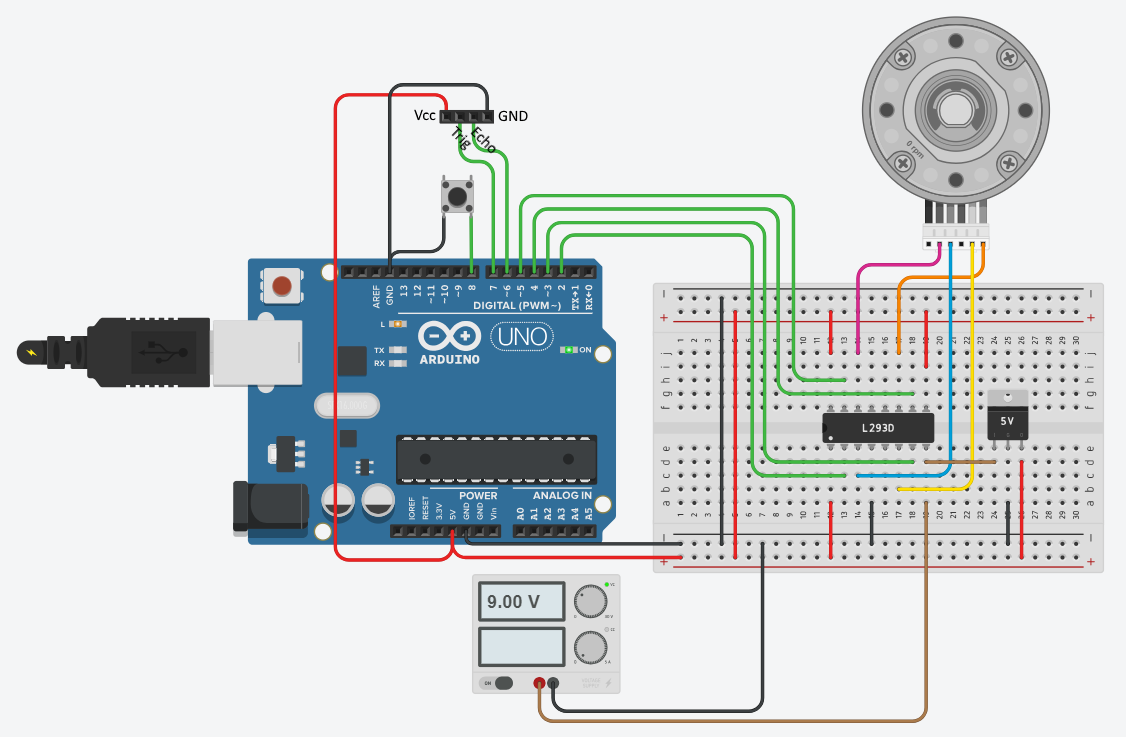 Note : Due to le limited capacities of Tinkercad, I had to swap some components.

To controll the Stepper, I used the Stepper library from the Arduino framework.
Sadly, after a powering the device a while, even without using it, the stepper become hot.
After reading the stepper library source code, I realized that the motor is never powered off between usages. I had to power it off manually to avoid overheat.

You can get the full source code on Github. 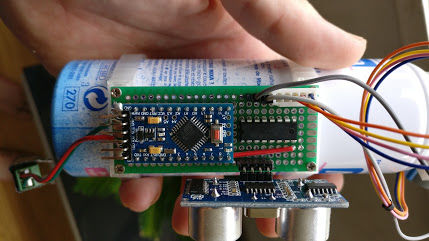 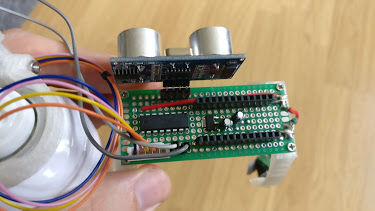 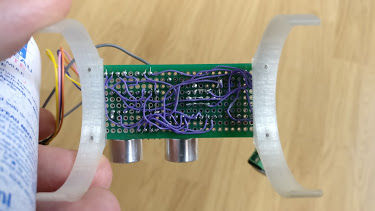 I created some small pieces to be able to mount the PCB on the bottle. 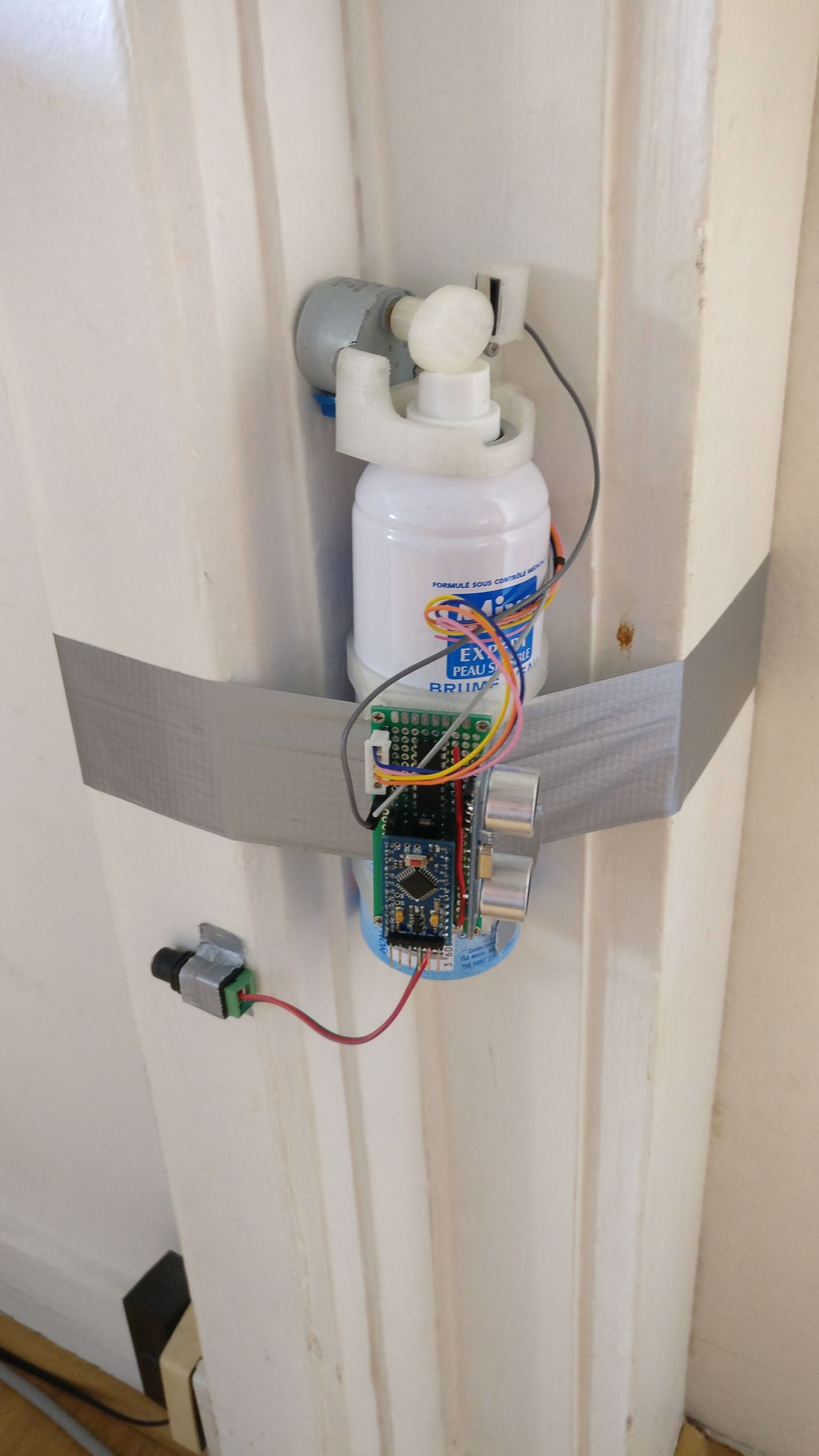 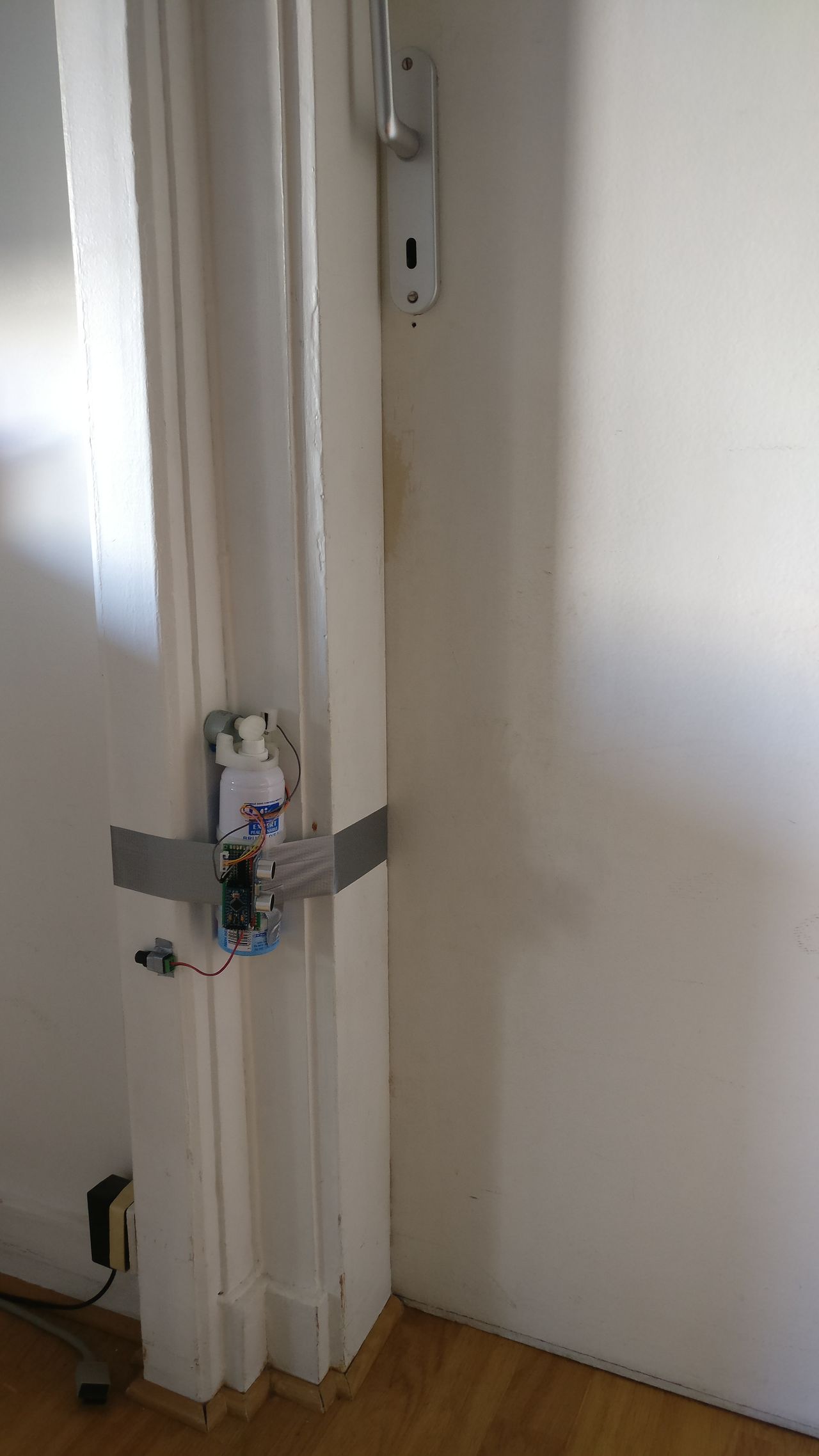 As I don't need the 150mL for this application, I also tried to use a Monoprix version with only 75mL. Fortunately, the cap and the top of the bottle is similar and quite common. I was able to use the same design without any modification.
I just tweaked some dimension to have a more reliable solution. 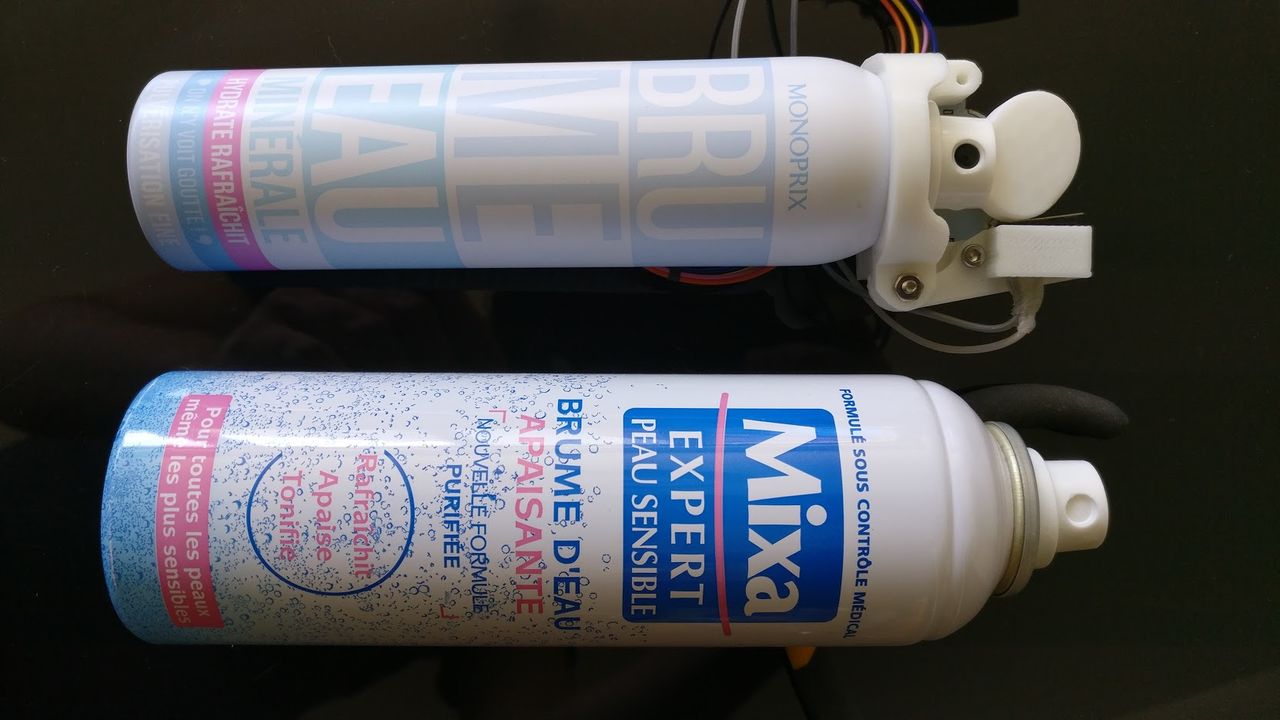 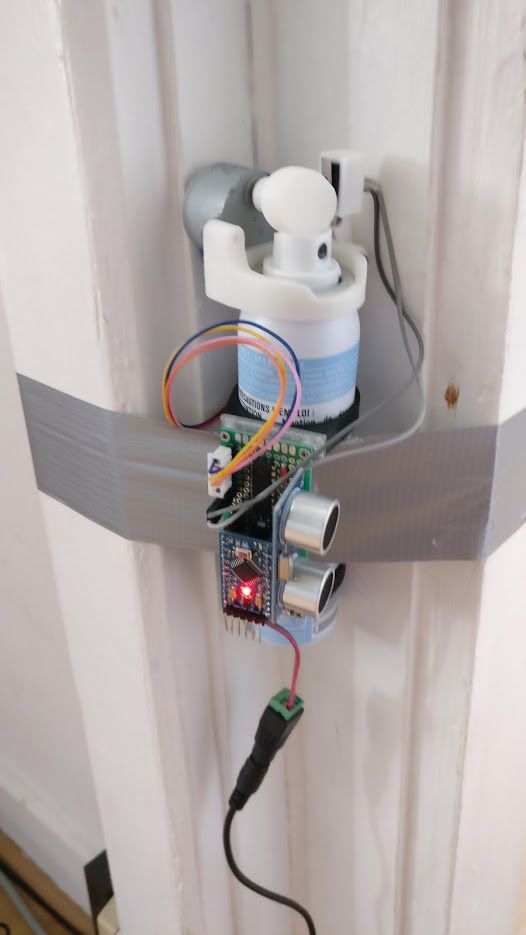 Once the device tapped to the wall near the door, the cat only scratches the door one time!
The device looks shitty, but I hope it's only temporary, and the cat will quickly understand that this behavior is to avoid. 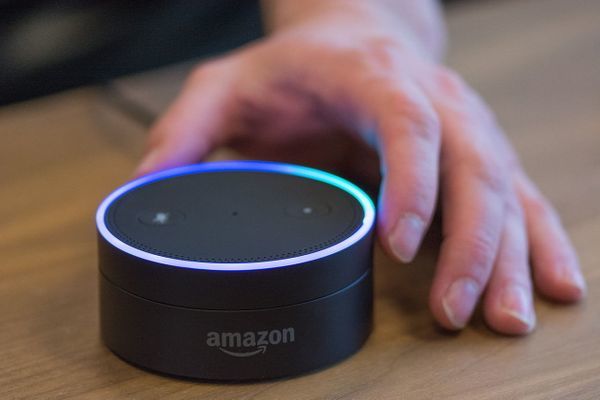 Personal assistants are the new trend. I though it was time to build something for Alexa. 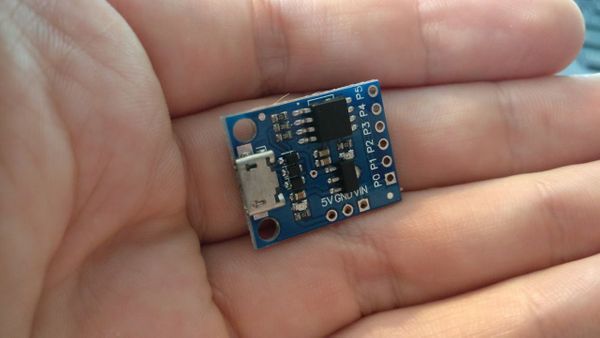 The ATtiny85 MicroNucleus boards are often delivered with some old bootloader. Let's try to upgrade them!